Like I mentioned yesterday, I went to see Dinosaur Jr but stayed to tape as much of the Cure as I could before my batteries conked out. I got 2 hours and 10min of the show, and they were still playing as we headed for the parking lot. Wow!
The start of the show sounds a little uneven, but gets a lot better as it goes on.

Well, I told you this post was going to be late…
I wasn’t planning on going to this show since I am not a Cure fan, but my stepson Jeremy really wanted to see the show, so we bought last minute tickets… and they were WAY the hell up there. That’s why this recording, while crisp and clear, has a strange mix. It was recorded from the top lip of the rose bowl grandstands. The best thing about this show is that Dinosaur Jr covered “Just Like Heaven” at a Cure show! I wonder if they asked Robert if it was cool, or if they just launched into it.

I should be at the awesome Kepi/Kevin Seconds/Hutch Harris/Dog Party concert at the Side Door right now, but family obligations won out today. Instead, here is an Ozzy Osbourne vid from Cal Expo amp. My friend Gary taped this, and he is not happy with the audio. It’s not bad, it has quite a bit of crowd noise. If anyone has a line on a better audio recording, let me know.
PS: This version of War Pigs caused this video to be blocked. I trimmed it out, but if it is still showing blocked, it should be vieable once YT trims that song out eventually.

Here is the most complete document of the legendary Coffee Creek- this show has a few cuts, but appears to be mostly complete. Coffee Creek were a side project of Uncle Tupelo (Jay Farrar, Jeff Tweddy, Mike Heidorn) plus Brian Henneman from the Bottle Rockets.

btw, I know that this ticket stub is for the other Coffee Creek show I posted (7/30/93). I should have used this image for that show, and the coffee cup (which I have been searching for, for many years) image for this show. Oh well. Both images from Michael Pemberton’s excellent factorybelt.net website.

Setlist:
Buckeroo (end)/ Are You Sure Hank Done It This Way?/ Love’s Gonna Live Here/ Your Gentle Way Of Loving Me/ I Wanna Destroy You/ Sleeping Room/ Wallflower/ Is Anybody Going to San Antone/ You’re Still On My Mind/ Sing Me Back Home/ Powderfinger (has a cut)/ Atomic Power/ Wrote A Song For Everyone/ instrumental/ Back to the Country/ Wasted Days and Wasted Nights/ Blue Eyes/ Moonshiner (has a cut)/ Wasn’t Born to Follow/ A Good Year for the Roses/ Do Re Mi/ Thanks A Lot/ Are You Ready For the Country?/ Texas Me/ Mendocino/ Movin’ On/ Texas in the Rain (?)/ Turkey in the Straw/ She’s About A Mover/ Waltz Across Festus (sic)

Some friends and members of the band asked me to dig this one up, so I bumped it up on the priority list. Cracker is opening for Primus here, and someone in the crowd apparently threw something and hit David early in the set. To retaliate, they play the current song (Euro-Trash girl) for over 20min. You can hear the crowd howling in protest about halfway through the song. Classic! David hurls the insults mid-song after he gets hit at about 15:50. MUST LISTEN. 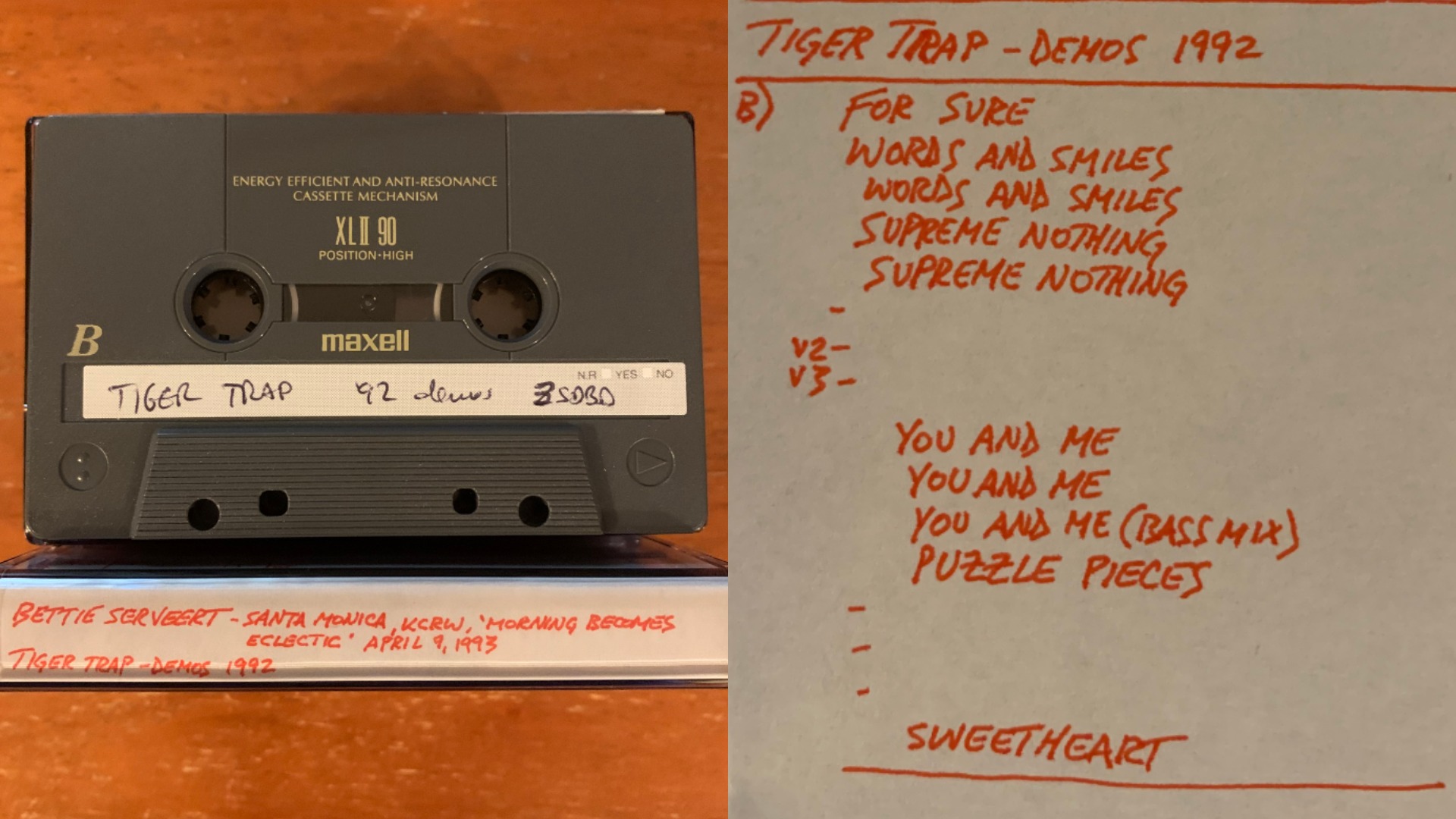 Recorded by: the band, as while this is labelled “demos”, this to me sounds like a rehearsal recording

This copy is labelled SBD3 meaning master > tape > tape > tape, so it’s not the best, but this does include the *vocal* version of Tore A Hole that Rose stopped singing to because she thought her lyrics are bad, so subsequent live performances of this are instrumental.

I haven’t done any mastering/cleanup, though there were a few dropouts I patched, as well as clearing out bumps caused by stop/starting recording, it’s pretty much as Tomzero ran these off tape…

I checked against the extant videos since they also have unreleased songs, but the other three aren’t anything that’s out there.

My friend Mike Siou has SBD2 and one day I’ll encourage him to make me a lower-gen copy, but suspect this won’t be a huge improvement. Mike got his version from a fellow concertgoer/fan by the name of “Matt” that we met at a 2016 Guided By Voices SF show, and Matt got his from Rose Melberg.